A note (an aside): Writing is therapy; while I wrote in diaries and journals with utmost discipline as a kid (see ‘Anne Frank’ blog post), that habit slowly waned as I grew older. I still diaried (that should be a word, right?) sporadically, and as a parent, tried to maintain a ‘what my kid said/did/first time the kid smiled (or was it gas?) type of journal. Now, the kids are older (a teen and a tween), and that habit has grown to once in a blue moon or even rarer. But writing in all its forms – whether it is writing down the ‘what-happened’ in my personal journal, or penning a poem to share with dversers or for myself, or researching and reading books to write about on my blog, or just random scribbles – writing always helps. It helps keep me centered – it is my form of meditation, maybe. So here is to writing at all times..

About this book: ‘The Children of Cherry Tree Farm‘ tells the story of four children who are sent to live with their uncle and aunt on their farm after bouts of illness makes the doctor and parents decide that being in the countryside will be good for them. So, Rory, Benjy, Sheila, and Penny head out to Cherry Tree Farm – and it is all fun and learning with the help of their uncle and aunt, as well as wild man Tammylan.

This book made its way to me as a gift from my dad – it is dated 21-6-83 – when I was but a wee kid. And I still treasure this book. I recall enjoying it so much when I read it first – I imagined meeting someone like that who could teach my brother and me about nature and wildlife too, to be able to spend time on a farm, and to live in a tree house, like the one mentioned in the book (photo below)

You can read more about the book itself on the Enid Blyton Society pages here.

Within this book – tons of facts about animals and introduction to foods (the food part is something common in many books by Blyton and readers end up hungry – eg: Famous Five series)! So here are some of them to share with you:

Tammylan shows Benjy and Rory his red squirrel friend’s home – called a drey. In his words ‘Sometimes squirrels use old nests made by birds – a magpie’s perhaps – but this time Bushy has made one entirely himself. He has wored very hard. ...’ using strips of tree-bark that he weaves into his nest along with moss and leaves to make it comfortable. ‘This drey is dome-shaped, and has a roof…sometimes they are cup-shaped, and then they are just resting places. This will make a fine nursery for squirrel babies’.

Did you know that a form is not just one of those paper applications or the shape of (or to shape) something? And did you know that unlike rabbits, the hare does not live in burrows? How are these two questions connected? Well, the form is the name given to the place where the hare rests (and births its young).  As Tammylan tells Benjy: ‘The hare is no lover of underground ways. He likes the fresh open air. He lives in the fields, in a hiding-place called a ‘form’ because it takes the shape or form of his body. Sometimes he makes his form among the thickets of briar and gorse..’ A photo below (Photo © Des Colhoun (cc-by-sa/2.0)) 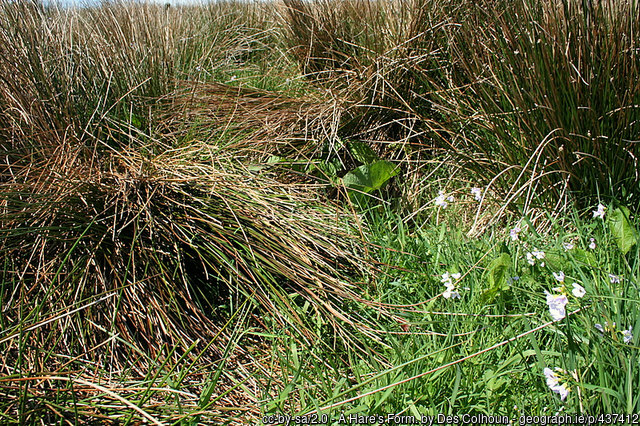 The stoat can be easily
Told from the weasel
By the simple fact
That his tail is blacked
And his figure
Is slightly the bigger!

A mole has its hair growing straight up rather than in one direction or the other – this ensures that there is no “ruffling up” of the hair in the wrong way when it is busy underground;

the skin a snake sheds is called ‘slough’;

the home of a badger is called a ‘sett’;

the otter can whistle(!);

surely gotta love the nest of the harvest-mouse (‘the mouse is so small that it can climb up a stalk of corn, hold on by its tail, and nibble the grain!’); (I have one photo here for you – photo courtesy – Pinterest ; you can check out more really beautiful photos here)

the shrew has an average life span of eighteen months;

and slow-worms or as known by another name of blind-worms (not really slow or blind) are neither worms nor snakes though they are often mistaken for both – they are actually lizards and the tell is their tails.

And since I did say food – this book has mentions of so many different items that the kids enjoy at home and on picnics, as well as with Tammyland in his cave and his tree house. Some of them are ginger buns, sticky gingerbread, plum cake, chocolate cake, cherry cake,  and sandwiches galore. Here is one that got a mention by other Blyton fan (and this book’s fan) too – Apple & Cheese Pie. You can check out the recipe she posts on her blog – A Bookish Baker.

So that was my C post for Day 3. And if you are looking to read the book now, you can order it here.

8 thoughts on “C is for Cherry Tree Farms”